Guard What Has Been Entrusted to Your Care

“What if the Lord called you to homeschool because of what He wanted to do in your life?”

I love to write. For awhile now, I’ve wanted to start a homeschool blog. Do you know what keeps getting in the way of me following through with that? Homeschooling.

I follow so many homeschool moms. Some seem to have this homeschooling gig down. Some seem to be flying by the seat of their pants. I feel like I’m somewhere in between. I know so many homeschool moms too. Some are so sweet and patient, like a cross between June Cleaver and Carol Brady. I, on the other hand, am more Roseanne meets Beverly Goldberg. But as the quote says, “There’s no way to be the perfect mother and a million ways to be a good one.”

I love homeschooling. My boys love homeschooling. But not every day is filled with love of homeschooling. Some days they’re angels, but some days are are just hard. Some days we butt heads. Some days drive me bat-crap crazy. I will tell you as a homeschool mom that every single day I have two completely opposite thoughts; ‘I make the boys do too much work’ and ‘I don’t make them do enough work’. I seriously think both thoughts simultaneously. Insane, I know. I just want the best for them so I’m constantly second guessing myself.

Today my 13 year old and I had a moment of butting heads. He’s just like me which just adds to the fun. He has mellowed out so much as he’s grown, but he is a teen now and that mood is real. I was helping him study for his Physical Science test. I asked him one question in his study guide and WWIII began. He answered wrong and I pointed out to him that he was wrong. Teenage boys do not like to be wrong. He literally argued with me for 10 minutes straight although I showed him the answer in his book, in the answer book, and offered to even Google it for him. Oh, he was mad. And then I got mad because seriously child, I am showing you the correct answer right in front of your face and you’re still telling me I’m wrong?! I was so mad I finally got up and let him stew. I will not help you when you’re arguing with me. I told him to just study by himself.

Then I sat down at the computer. My Facebook was pulled up and I just happened to look at the top post. It was a post from a homeschool mom’s page that I follow. She had posted, “What is your current favorite Bible verse?” And the very first comment was, “1 Timothy 6:20 Guard what has been entrusted to your care.” 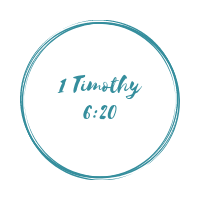 After a few minutes of answering study questions on his own, I went back to help him. He said he thought I was asking a completely different question and that’s why he was arguing with me. That would’ve been good to know in the beginning and saved us all a lot of time and attitude, but then I would have never seen that bible verse at the exact moment I needed it. He eventually took his test and aced it so all’s well that ends well. These little humans that I have been entrusted with try me and test me, but they also make me so proud to be their mom.

Sorry. No data so far.

Sorry. No data so far.